Carica papaya — also simply known as papaya or pawpaw — is a type of tropical, fruit-bearing tree native to Mexico and northern regions of South America.

Today, papaya is one of the most widely cultivated crops in the world. Its fruit, seeds, and leaves are frequently utilized in a variety of culinary and folk medicine practices.

Although human research is lacking, many papaya leaf preparations, such as teas, extracts, tablets, and juices, are often used to treat illnesses and promote health in numerous ways.

The wonderful benefits of papaya leaf:

One of the most prominent medicinal benefits of papaya leaf is its potential to treat certain symptoms associated with dengue fever.

Dengue is a mosquito-borne virus that can be transmitted to humans and cause flu-like symptoms, such as fever, fatigue, headaches, nausea, vomiting, and skin rashes.

Severe cases can also result in reduced platelet levels in the blood. Low platelet levels can contribute to an increased risk of bleeding and are potentially fatal if left untreated.

While there’s currently no cure for dengue, several treatments are available for managing its symptoms — one of which is papaya leaf.

What’s more, the papaya leaf therapy had very few associated side effects and was found to be much more cost effective than conventional treatments.

Studies in mice with diabetes have found papaya leaf extract to have potent antioxidant and blood-sugar-lowering effects. This is attributed to papaya leaf’s ability to protect insulin-producing cells in the pancreas from damage and premature death.

Still, no scientific evidence indicates that the same or similar effects may occur in humans.

More research is needed to determine whether papaya leaf can be used to help manage high blood sugar levels in humans.

Papaya leaf teas and extracts are often used as an alternative therapy to alleviate uncomfortable digestive symptoms, such as gas, bloating, and heartburn.

Papain is well known for its ability to break down large proteins into smaller, easier-to-digest proteins and amino acids. It’s even used as a meat tenderizer in culinary practices.

One study found that the supplemental use of a papain powder sourced from papaya fruit reduced negative digestive symptoms, including constipation and heartburn, in people with irritable bowel syndrome (IBS).

Most of the evidence favoring its use for this purpose is limited to anecdotal reports, and there’s no guarantee it’ll improve your digestive function in any way.

4. May have anti-inflammatory effects

One study found that papaya leaf extract significantly reduced inflammation and swelling in the paws of rats with arthritis.

Yet, no human studies have confirmed these results.

Thus, at this point, scientific evidence is insufficient to determine whether papaya leaf can treat acute or chronic inflammation in humans.

Topical applications of papaya leaf masks and juices are often used to improve hair growth and scalp health, but evidence to support its efficacy for these purposes is extremely limited.

Some research suggests that high levels of oxidative stress in the body may contribute to hair loss. Eating antioxidant-rich foods may help alleviate oxidative stress and subsequently improve hair growth.

Proponents of using papaya leaf to improve hair growth often cite its rich supply of antioxidants. However, there’s no significant evidence that the topical application of papaya leaves can benefit the hair growth process.

Certain types of dandruff are caused by an overgrowth of a fungus called Malassezia, which can impede hair growth.

Papaya leaf has demonstrated antifungal properties in test-tube studies, so it’s often thought to support hair and scalp health by inhibiting the growth of dandruff-causing fungus.

However, papaya leaf has not been specifically tested against Malassezia, so there’s no guarantee it’ll have beneficial effects.

Papaya leaf is frequently consumed orally or applied topically as a way to maintain soft, clear, and youthful-looking skin.

A protein-dissolving enzyme in papaya leaf called papain can be used topically as an exfoliant to remove dead skin cells and potentially reduce the occurrence of clogged pores, ingrown hairs, and acne.

Moreover, papaya leaf enzymes have been used to promote wound healing, and one study found they minimized the appearance of scar tissue in rabbits.

7. May have anticancer properties

Papaya leaf has been used in traditional medicine practices to prevent and treat certain types of cancer, but modern research is still lacking.

Papaya leaf extract has demonstrated a powerful ability to inhibit the growth of prostate and breast cancer cells in test-tube studies, but neither animal nor human experiments have replicated these results.

Although consuming papaya leaves and other antioxidant-rich foods may play a role in cancer prevention, they have not been proven to have any curative abilities.

COVID-19’s devastating impact is being felt around the world. Protecting ourselves and our loved ones by taking preventive measures are the most important step to counter the deadly coronavirus.

Accurate information from World Health Organization (WHO) should be shared accordingly and spread messages of support to your community. 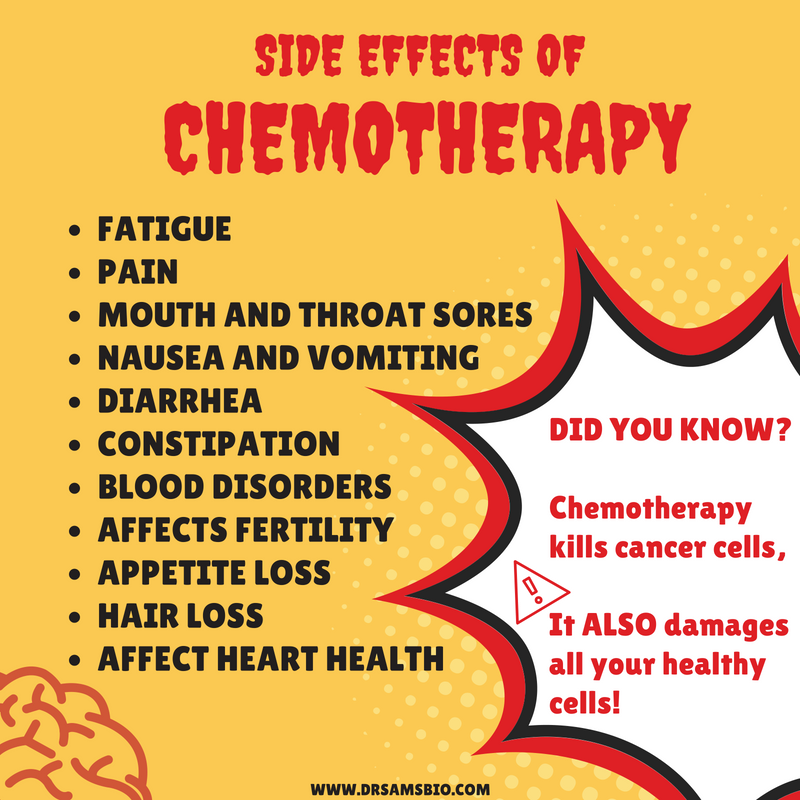 Why does chemotherapy cause side effects?

Chemotherapy works on active cells. Active cells are cells that are growing and dividing into more of the same type of cell. Cancer cells are active, but so are some healthy cells. These include cells in your blood, mouth, digestive system, and hair follicles. Side effects happen when chemotherapy damages these healthy cells.

Common side effects of chemotherapy

Long-term side effects. Most side effects go away after treatment. But some continue, come back, or develop later. For example, some types of chemotherapy may cause permanent damage to the heart, lung, liver, kidneys, or reproductive system. And some people have trouble with thinking, concentrating, and memory for months or years after treatment.

Nervous system changes can develop after treatment. Children who had chemotherapy may develop side effects that happen months or years after treatment. These are called late effects. Cancer survivors also have a higher risk of second cancers later in life.

You have to understand, that chemotherapy kills cancer cells, it ALSO damages all your healthy cells. It doesn't target particularly on cancer cells!

Now, what if I tell you:

There is a better solution (In fact, the BEST one so far) to treat cancer!
The best thing is...it doesn't cause these scary side effects!

Contact us to find out how it works! *FREE CONSULTATION*